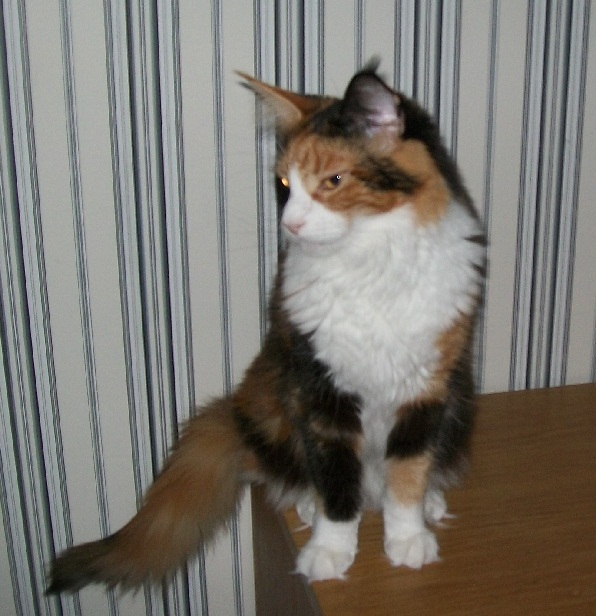 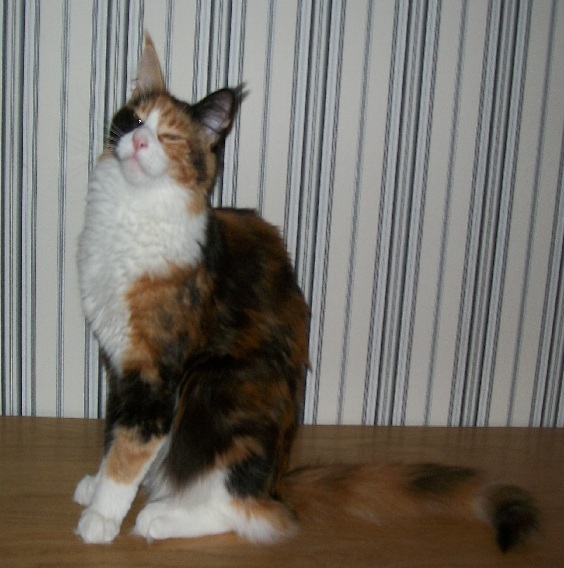 Appearance
Maine Coon is a robust and tall breed. They develop slowly and are not ready adults until age three.Females usually weigh around 3.5 to 6 kg and males 5-8 kg, but there are bigger examples.The cat was developed in the harsh climate in the Northeast. Due to this kind of climate it was only the strongest and best hunters who could survive. It has large eyes, ears and see and hear their prey well. The paws are large, round and well furred and can act as snowshoes and the tail is long and bushy, so the cat can wrap it around themselves during chilly nights. It is semi longhair and has shorter fur on the head, shoulders and legs to prevent tangles. The breed usually have tassels on the ears.


Temperament
The Maine Coon is known to be doglike, they always want to be everywhere and curious about what the rest of the family is doing. It is quite common that they acquire a "favorite" mom / dad as the extra cling to, but they are generally kind and friendly to everyone. A Maine Coon is often easy to get along with other animals, both dogs and cats. A fun feature of the Maine Coon is that besides the usual "miauw" often uses a twittering "brrrp" which you often hear when they are mischievous or when they are searching and wanting closeness and contact. Maine Coon often has a penchant for water and likes to play with the water bowl.


History
Maine Coon is considered the first cat breed from America. You do not really know how the breed originated, but there are many myths surrounding it. One of the most common is from Maine and goes out of the cat caused by mating between cats and raccoons.This was believed due to the size of cats and their big, bushy tails. Another highly controversial tale is that the French queen Marie Antoinette had these cats as pets during the French Revolution and chose to send them in a boat to America that they might escape the revolution. More likely is that the cat originated from natural crosses of long-haired cats that sailors brought to Maine ports and English cats that settlers brought with them in the 1600s, Scandinavian or Russian cats, and shorthaired American cats.